I visited Los Angeles to receive “Tesla Model S”. When I arrived at the airport, I saw Takashi Sorimachi and his wife, Nanako Matsushima, who are Japanese actors. They might have boarded the same aircraft.

This entry is written in the aircraft going back to Japan. Recently WiFi service is offered again, we can upload the entry in the sky! (But it’s not necessary to do so with paying a charge, I’ll upload this after arriving at the airport. 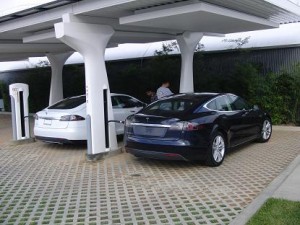 Here is the Tesla Supercharger Station near LAX. The next white car is almost fully equipped. It is switched to from a roadster. The owner is a younger entrepreneur who runs the internet-advertising business. He made the reservation at Oct. 2010, and he finally got the car in the first week of Dec. 2012. He waited more than 2 years! The serial number is between 1,300 to 1,400. By the way, our car’s number is 2,480 or thereabouts.
For the charging here, the electric current of more than 130 A is used. Furthermore, the next one is applied 90kW. We can use 100V source of home use, but the charging speed is 8km/h level, the distance covered is not so long even if it’s charged all night. It is not clear whether it fits into ChadeMo standard in Japan. Charging with 200V will be faster, but the battery capacity is 85kWh, once it becomes empty, we need 15 hours to make it full. 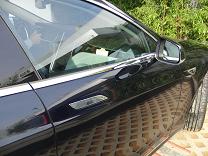 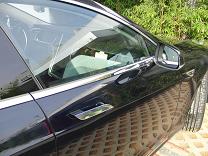 It’s also difficult to find operation buttons. There are few kinds of operation buttons. Most operations are conducted on the 17 inch panel which installed on the front. Please imagine that the car is controlled by tablet PC. Until I become used to this, I have some difficulties to find where I can direct the required operation. Some new functions are installed, if any chances, I’ll let you know.