We tried to charge the battery of Mdel S, but it was not completed.

We moved Model S to the research center, but there was no way to take model S down from the self-loader, because we couldn’t release the parking brake manually. To my surprise that not only the main battery but also the 12V lead-acid battery was over. Inquiring USA and we managed to jumpstart Model S and release the brake, and Model S could land.

Now it’s being charged at AC 100V. The charge was started using Japanese power source. However, the current is limited and it took long time to complete battery charging. We prepared the socket of “NEMA14-50”, it will be available in the next week. We are also preparing the charging station for Japanese EV, it can be used for Model S, too.

Although it is natural, since there is no engine, there is a space under a front hood. 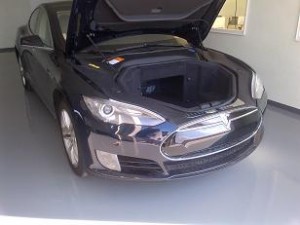 This is a front trunk, but it’s named as “FRUNK” by TESLA.

Although I feel unfamiliar with this, there is enough space. I can use both trunk and FRUNK properly.